“coolness is to know what to do with form”

I wish I had Elodie Pong’s life. Her text messages are so cool. If I were to assemble my text messages into a delicate little book the outcome would be nowhere near as enigmatic and intriguing as hers. No French, no Berlin, no “sex and sake.” By comparison, I’m a total loser. Even if We Are Knights on the Trajectories of a Post-Everything Era confesses to be “an experience of writing by editing,” a composite of “breached identities,” and ultimately a work “of possible situations, real or fictional,” I still make the grandiose claim that Elodie Pong lives a charmed life in Europe. If I were to choose a page from her book at random, and blindly place my finger on an excerpt, I bet the selection would be sexy and evocative.

Allow me to demonstrate:

“beware of the crocodiles, sweetie”

We Are Knights is a book of bursts. Its aesthetic and charm lie somewhere between a telegram and a tweet. Economy of words is the hallmark of the SMS form. Delicately framed in its surrounding negative space, each message is a work of literary art. These are petite poems with fortune cookie message satisfaction. I love how much I can get out of so little.

But that’s just me. For fun and perspective, I asked my 72-year-old Aunt Vicky, a voracious reader, to partake in Elodie’s book. She found it disappointingly skeletal. What was missing for her was the ornate and heavy fabric of prose. To be fair, my Aunt Vicky has never sent a text message in her life, and probably never will. Her dissatisfaction makes me wonder if it’s necessary for one to thoroughly know SMS communication, to have it as an integral part of everyday existence, in order to appreciate We Are Knights.

Aunt Vicky is no stranger to minimalism in art and it’s not like the abstract narrative is anything new. Take for instance, Michel Butor’s Mobile (1962), a travelogue composed of found text that Butor encountered on his six month journey throughout America. Mobile is incredibly fragmented and non-linear. It is a book that has been described as “unclassifiable.” So what is it then that makes Auntie Vicky shrug at We Are Knights? It surely must be her unfamiliarity in communicating via SMS. I’m certainly captivated by Pong because I relate to her world. I too inhabit a realm totally engrossed in text messaging. 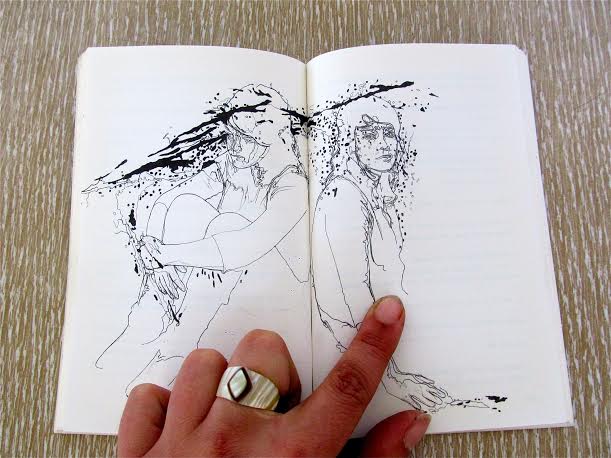 What my Aunt does love are Elodie’s illustrations, and I agree. They are beautiful. Elegantly drawn, light and ethereal, they remind me of brain wave imagery. I assume her renderings are of the cast of “non-identified characters” whose SMS communications create the narrative. I found myself playing a mental game of match the image to the message. I’ll be honest the game was a little distracting and while that’s okay, it made me realize that I enjoyed best the anonymity and ambiguity of her SMS collage-writing. I liked my characters to remain non-identified.

Sometimes post-everythingness feels like a condition only the young can claim. I imagine myself at 72. I once heard someone say that the children of the future will be these sort of techno-luddites, so perhaps the SMS of the 2054 will be delivered via messenger pigeon drone (MPD for short). For the sake of this analogy, let’s just say that is exactly what it will be. Let’s also say that I’ll have no direct interaction with this MPD device whatsoever. Could I enjoy a book written entirely from MPD data? Would I even get it? I guess I’ll have to wait and see.

Elodie Pong, We Are Knights on the Trajectories of a Post-everything Era, (JRP|Ringier, 2008)

Images: Cover and interior of We Are Knights on the Trajectories of a Post-everything Era