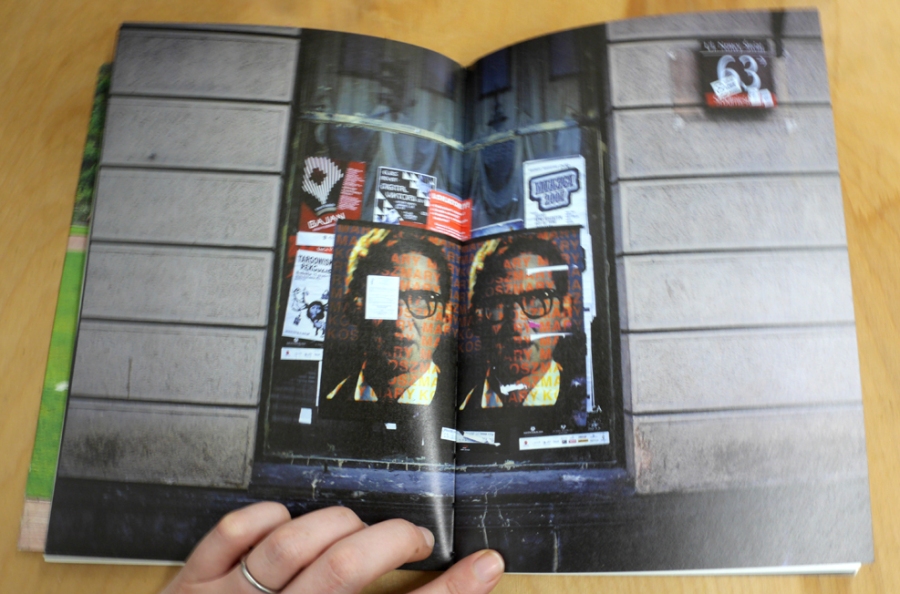 In Short Memory, the politics of Yael Bartana’s suggestive, quasi-narrative videos are up for debate. Bartana’s art speaks the language of propaganda, miming the call to action that is essential to that form—but the end result, while stirring, is also ambiguous and the responses are not uniform. In an interview with Bartana, printed as the final essay in Short Memory, she describes being contacted by a graduate student who was writing her dissertation on her videos. The student was an Israeli settler, her politics to the right of Bartana’s, nonetheless she had developed an interest in Bartana’s practice. She explains, “I found that very surprising, but also very intriguing to see that there is a certain ambiguity to my works even if they are critical, that they can be read differently. She was seriously upset that my work was always referred to as leftist—as if there was a leftist text written alongside my works.” Bartana’s videos utilize a familiar lexicon of heroic figures and rousing music, appropriating the formal structure of visual politics. This signage is effective, and it is impossible to watch Mary Kozmary (2007), the first installment of her three part series, And Europe Will Be Stunned (2007-2011), without feeling moved by the call to action. One question that Short Memory seeks to address is how are we moved, and in what direction?

The first essay in the catalogue is exhibition curator Sergio Edlesztein’s “Utopias and Historical Reversibility: Yael Bartana’s New Works.” According to Edlesztein, in Bartana’s videos, structure and affect are at odds: superficially, the propagandistic voice of the work suggests a world of moral certainty, a tone which is consistently undermined by the looping, cyclical structure of the videos. This is a world where, despite the sincerity and conviction of individual gestures, outcomes and meanings are uncertain. In Summer Camp (2007) a Palestinian house, demolished by the Israeli military, is rebuilt by a group of activists. The musical soundtrack is appropriated from Awodah, a 1935 promotional film meant to encourage the Jewish immigration to pre-state Israel. This incongruity between image and score (the image an act of protest against the Israeli occupation of Palestine, the score a melodic call to the Zionist cause) is furthered by the film’s end, “…down in the wadi, the Israeli army jeep still patrols, conveying the uncanny feeling that this might as well be a loop, rather than an actual ending: the army will return to demolish the house, and the volunteers will come back to rebuild it, ad infinitum.” For all its fluency with the language of propaganda, Summer Camp refuses the primary supposition of that form: that just actions will produce just effects. Instead, when the film should climax in a grand moment of accomplishment, we find ourselves back at the beginning.

In “A Nightmare Exposed”, by Joanna Mytkowska, this idea is understood within the psychoanalytic framework of trauma and repetition. She suggests thatin order to understand Bartana’s work, we must treat her videos like recurring dreams (or nightmares) in which “multi-layered alogical narration evokes conflicting associations, insistent ideas, and desires that can never be fulfilled.” Mytkowska is making reference to Freud’s “Beyond the Pleasure Principle,” in which he describes the “traumatic neuroses” of war veterans. The primary symptom of this condition (now called Post-Traumatic Stress Disorder) is repeating dreams that force the sufferer to re-live, over and over, the traumatic event. Freud explains this “repetition compulsion” as an expression of the desire to gain mastery over events that are out of our control, to become (at least in our minds) an active participant in our fate, rather than a passive victim. Understood in this way, Bartana’s videos evince all the logic of the traumatic nightmare, composed of a pastiche of familiar signs, and “told using the long-forgotten language… of political propaganda.”Her videos mix, repeat, and combine from the fabric of our collective political imagination, borrowing from Zionist educational films, Soviet propaganda, and the filmic devices of Leni Riefenstahl. The repetition of this political lexicon is at times familiar and uncanny – and, despite our mixed associations with the source material—deeply seductive.

For Mytkowska, a primary figure in Bartana’s work is the apparition. The specter of the Holocaust haunts Mary Kozmary, as do allusions to the Israeli occupation of Palestine. In the piece, Slawomir Sierakowski, a young Polish activist, pleads, “Today we are fed up looking at our similar faces… Today we know that we cannot live alone. We need the other, and there’s no closer other for us than you! Come!… Let us live together. Let us be different, but let one not harm the other.” In the insistent utopianism of his rhetoric, past and present traumas are unmistakably intertwined. As much as Sierakowski’s speech operates as a call for immediate action, it also functions as a séance and an exorcism—the ghost must return so that we might be released.

Mytkowska’s essay ends with a quote from Žižek: “Perhaps the best way to encapsulate the gist of an epoch is to focus not on the explicit features that define its social and ideological edifices, but on the disavowed ghosts that haunt it, dwelling ina mysterious region of nonexistent entities which persists nonetheless, continuing to exert their efficacy.” In Mary Kozmary, it is those ghostly figures, denied and repressed, that might offer us a different understanding of the past, and a new way of being in the present – more provisional, and more vulnerable. As Sierakowski says, “There is no future for chosen peoples.”

The politics of Yael Bartana’s work, as discussed in Short Memory, are difficult; she refuses the straightforward moral imperatives that characterize most political rhetoric, in art and elsewhere. But this refusal doesn’t add up to a disengaged cynicism, or a lack of conviction. It is her insistence on historical accountability, and her ability to hold past and present traumas together that allows for the articulation of a complex and rigorous ethics. In Bartana’s work, no one is let off the hook – we are accountable to each other, and to the violence of our shared history. And it is from within this place of accountability that we must act.  Edlesztein calls this logic “delirious,” and Bartana’s insistence on a referential, cyclical aesthetic can produce a vertiginous effect – history as mis-en-abyme. But, Edlesztein adds, “In the case of historical tragedies such as the ones that befell the Jews and Palestinians, these might well be the only realistic solutions.”