In his 2016 memoir-cum-art world commentary Hans Ulrich Obrist Hear Us, Bill Burns leads the reader on an energetic jaunt through vignettes from his childhood in Regina, Saskatchewan and later years working as a professional artist in Canada and further afield. Like any experienced wilderness guide, Burns’ focus is always twofold. He details microcosms—in this case through sharp anecdotal visual and textual accounts of the relationships between the natural world, his art practice, and the purported art world ecosystem—while also compelling the reader to peruse the macrocosm from a position of constant motion. The art world is in the reader’s periphery, but, really, the reader is in Burns’ world, traipsing along behind him as he cuts a path and selects propitious vistas for breaks and conversation. The reader senses Burns’ meta-attunement—his awareness of the landscapes’ and his company’s features—but notes his reserve, blithely allowing some truths to speak for themselves.
Burns’ reflections on his early call to art-making appear self-consciously rooted in associations between life’s frailty and art interpreted as vocation within his Catholic home and school setting. At age seven, Burns begins being taken aside by his Sweet Caporals-smoking teacher, Sister Mary Bertrand, who prescribes earnest career advice. Burns recalls “She would ask me to sit down, and proceed to tell me that she knew of my destiny. … It was clear to her that I would become an artist.” (38) Sister Mary “advised against jocularity, and in favour of politeness. She put forward that some things should always be private, and that an artist should strive to be honest while adding that this is not always practical. Finally, she implored me to ‘keep your name clean’” (38). The reader next hears of Sister Mary when she sidles up to Burns several years later “in the Studebaker she shared with her Mother Superior” and reiterates imperatives toward privacy and keeping one’s name clean (42). Rather than technical training, Burns’ early supporter impresses upon him the importance of responsibly negotiating with destiny. One wonders if her counsel may have inspired Burns’ later creation of public appeals to the art world elite; Burns has made the book’s title and phrases like “Beatrix Ruf Watch Over Me” and “Hou Harou Deliver Us” into temporary installations atop international art museums and aerial banners pulled by planes during art fairs. 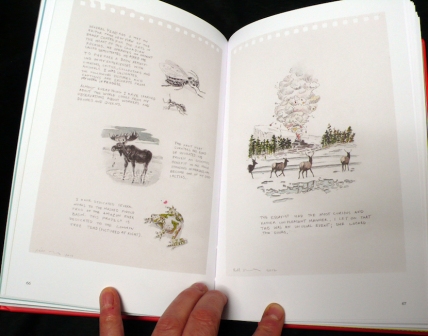 Later sections of the book where Burns discusses the art world more explicitly are framed by descriptions of his early interests and exposures. Burns’ observations are relayed with a sense of humour that suggests a simultaneous trust and skepticism toward his contemporaries and the institutions and networks he and they rely on. Several of the drawings featured in Hans Ulrich Obrist Hear Us feature scenes of disconnection ranging from severe disappointment at professional false starts to comical miscommunications concerning individuals misrepresenting their connections or interests. Frequently, these missed connections implicate a point of relation between Burns and his peers mediated by the natural world. In an image discussed in both of the critical essays included in the book, written by Dan Adler and Jennifer Allen respectfully, Burns portrays a rustic cabin beneath exuberant northern lights with the caption, “The critic’s third wife awoke to what she described as a strange crackling noise” (80). As Adler insightfully remarks, “Burns is fond of poking fun at writers’ and curators’ supposed power with language, but he never performs satirical jabs in the traditional sense of engaging in obvious attacks upon a single, clear target” (114). The curator’s wife, in this case, has likely been brought along on one of the rural Canadian expeditions Burns is sometimes called upon to provide for visiting members of the art world elite, an activity revealing, as Allen points out, the fatiguing project of discerning the line between art and the “real world” within upper cultural echelons. Burns situates himself as proximal to this line with conceptual works like his famous Safety Gear for Small Animals (1994) and lived experiences, such as playing tour guide for varyingly engaged audiences.

Hans Ulrich Obrist Hear Us reminded me of reading Roald Dahl’s My Year as a child. My Year is ostensibly an illustrated memoir written for an ageless audience, but composed with the recognition that Dahl’s principle following was children enamoured with Matilda’s precocity and Grandpa Joe’s pre-Chocolate Factory heel clicking. Burns’ book is not written for children, but it is written in the same kind of jocular—what would Sister Mary say?!—style, attending to the peculiar details of working life and the daily devotion required to press on and create a finished work. Midway through Hans Ulrich Obrist Hear Us, Burns informs us that he suffers from “agitated aphasia,” a condition involving the “inability to either utter or write [certain people’s names] without becoming agitated” (52). Allen writes intriguingly on this ailment and its relationship to storytelling in her essay, “We Still Need Bill,” noting the ways in this condition allows Burns to present other people’s memories as facts within his own selective narrative. The reader is suddenly reminded of Sister Mary’s bidding toward privacy. How much can Burns share directly? How much does he want to? How much do we want him to? In occupying a space between artist confessor and art world travel guide, Burns’ book reflects Walter Benjamin’s injunction that storytellers ought “‘offer proverbial instruction, not factual information’” (153). The results are an amusing and honest—or so the reader wants to believe—portrait of Burns and his world. 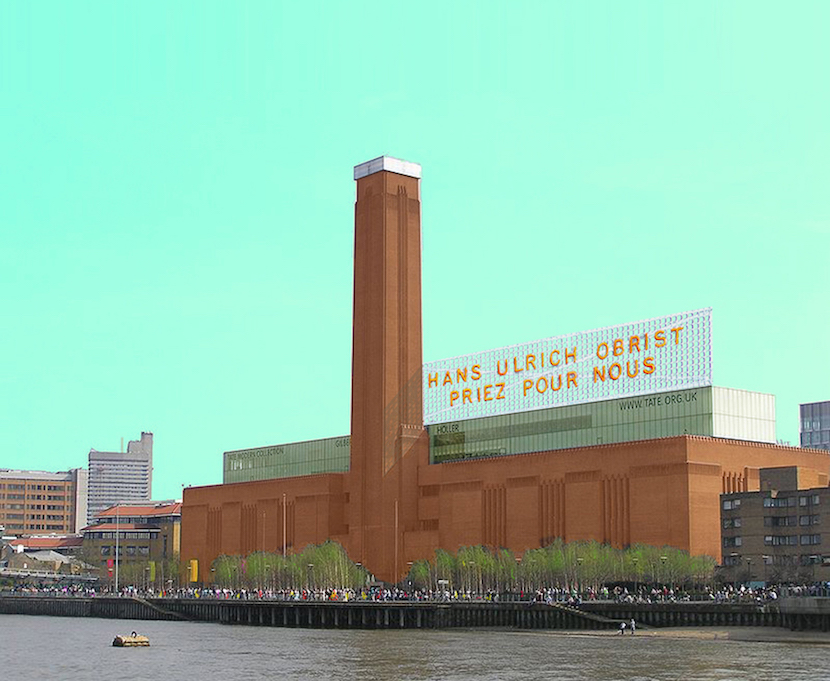